Depending on the nature of the relationship and the breakup, sometimes people who’ve split up continue to be friends. That’s all well and fine, as long as all parties involved are okay with the arrangement.

But this ex-girlfriend actually took the time to write up a detailed list of her ex-boyfriend’s likes and dislikes for him to give to his next girlfriend, and I…? Huh.

my ex girlfriend wrote this for me and it’s literally the best thing i ever gotten in my life pic.twitter.com/cfPR0mkwJy

The list, which reads like the care and feeding instructions you’d give to someone watching your dog for a week, was written in the notes app and tweeted by Twitter user Jacob (@jacobamirabrown). Along with the three-page list, he wrote, “my ex girlfriend wrote this for me and it’s literally the best thing i ever gotten in my life.” 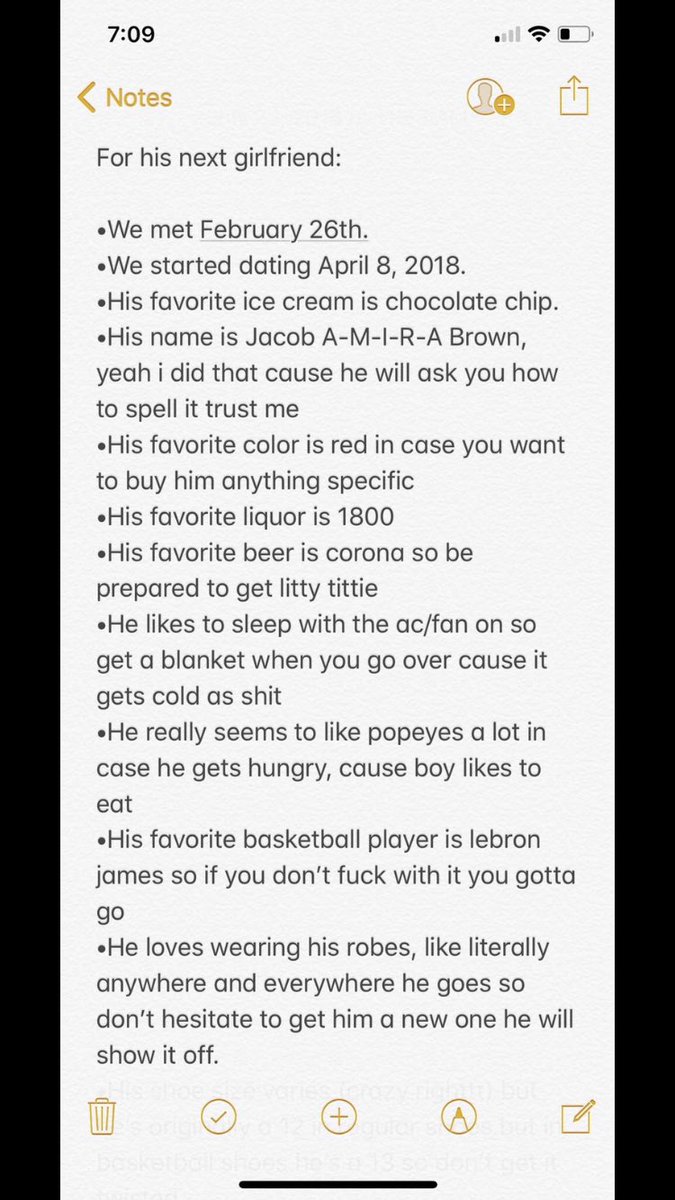 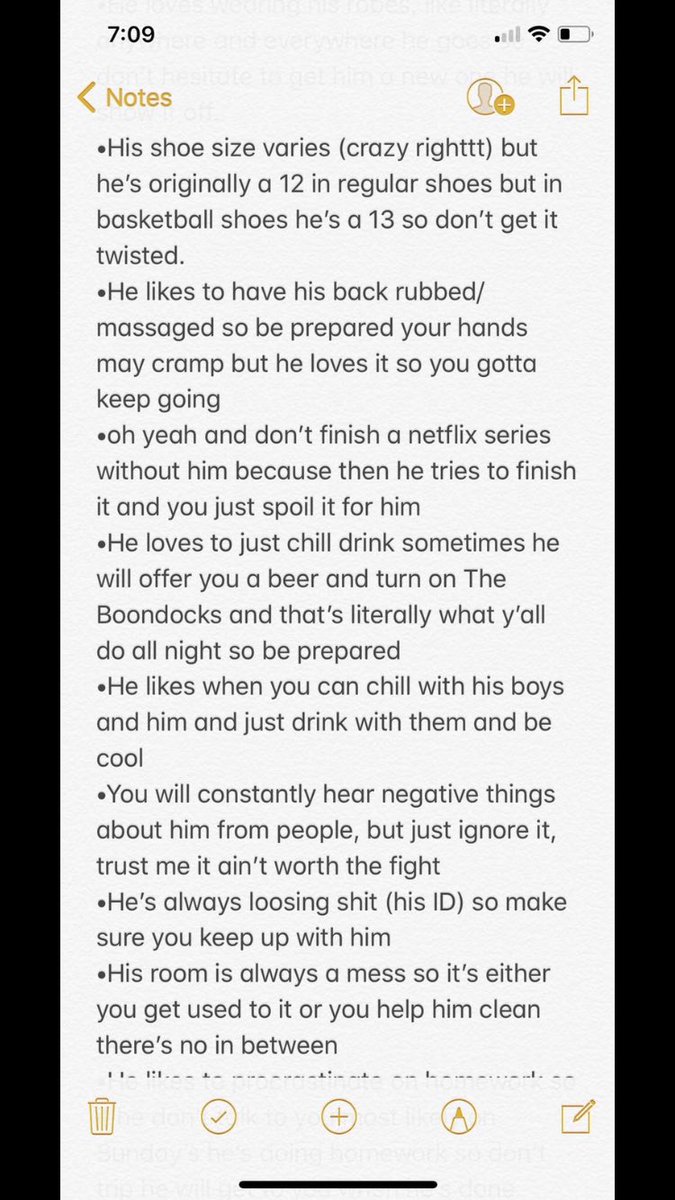 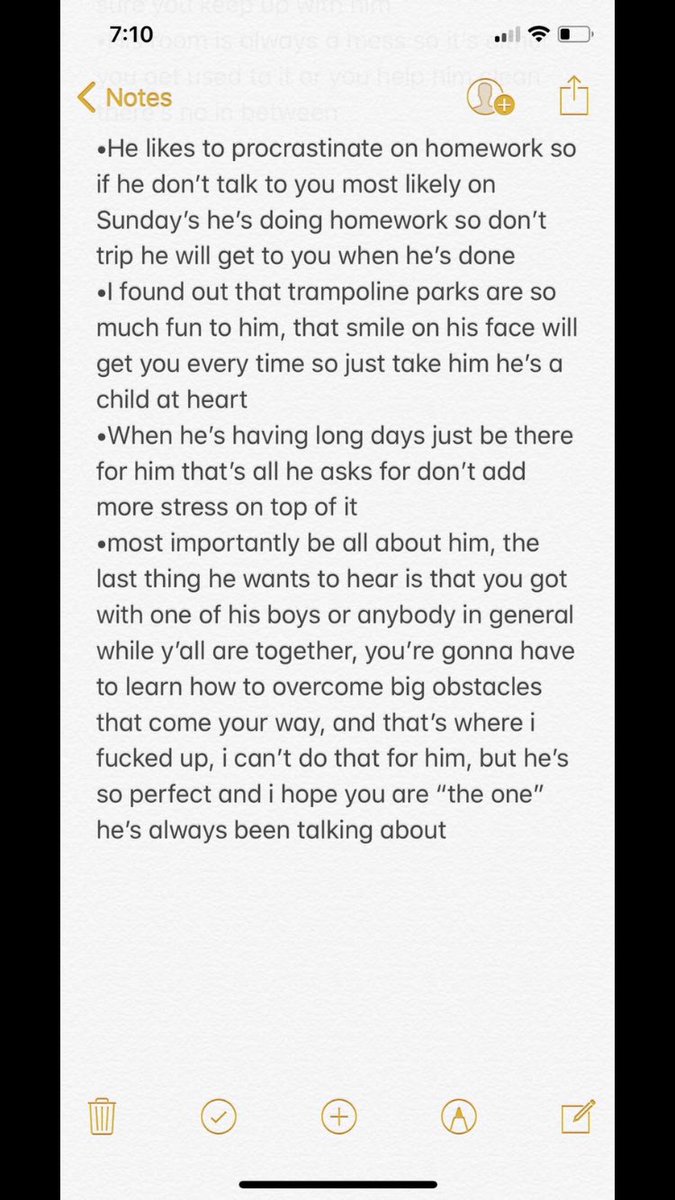 The whole thing is a little strange—well, kind of a lot strange. Who does this? This is like pinning an address to a child to make sure they don’t forget where they live, only, this guy’s not a child.

ALSO, why did she put the date they started dating? Why would a new lady need to know that?

Although, it is a little helpful to get information like “he’s going to want to watch beer and TV all night sometimes and you’ll just have to deal with that” and “you’ll have to massage him until your hands cramp,” and “he will wear try to wear a robe when he goes out with you.” That’s good stuff to know up front, so that if the next girl isn’t down for basically giving in to all his demands, she can peace out early.

I hope the consensus is this that if this is real this shit is really, really weird https://t.co/AAnJ223lOS

she gave the next girl the blueprint I said wow ? weird flex but hey ??‍♀️ https://t.co/GSVtrpTYyB

This is so deeply embarrassing for all parties https://t.co/OAopCK45yh

imagine trying to show this to ur next partner lol https://t.co/stAIFiq71w

Some couldn’t imagine that level of involvement from an ex in their future relationships.

“For his next girlfriend” bitch I will beat u up https://t.co/VNORK6OChU

And some found it uncomfortable that an ex would even do this.

If my ex wrote this I would’ve told him to mind his fucking business https://t.co/IeY3cdXNxW

if i ever do clown behavior like this beat my ass https://t.co/pgw7xsQM9u

On the upside, getting this list from a guy would be a good sign you should probably dump him quick, so in that sense, it’s definitely time-saving.

if a man ever sent me some shit like this from his ex i’d leave him so fast https://t.co/vV3xyC6k3s

Loool if someone i was talking to sends me a list that his ex made, ill lock it off so quick because wtf is this??? https://t.co/bdGAHymOK8

A few people pointed out that this is LOT of detail. Like, a lot a lot. It makes Jacob seem like he needs to be taken care of. People should not need user manuals.

are these instructions on how to take care of a baby or https://t.co/VMOfSA1wkA

From one babysitter to another ????????‍♀️ he also likes huggies instead of pampers ????

You can tell this had to be a young couple BUT if not ???????? EXACTLY seem like she was tryna be his mama not his girl

Precisely. I know we’re made to nurture. But did homie even want to be babied like this? And LET my man pass this to me talking about “here yo study guide” I’m leaving. This childish.

If someone gave me this I’d just give them their boyfriend back loool wtf is this https://t.co/quRU3BLKM8

My own mother doesn’t even know this much about me, she still loves you bro

And a few people suggested he get back with her, not wait for this mystery future girlfriend. Especially if the list meant that much to him.

boy if you don’t take her back

Someone else mentioned that the list didn’t really do the guy any favors (like make him seem interesting in any way).

How yall dating men with the personality of a loaf of bread https://t.co/cJdDWPz1GL

Everything about this is weird af. Either this girl was taught to mother and cater to men and is a joke of a person, or it was written by this guy pretending any girl would be into a dull ass child like this. A beer and TV wow he sounds driven

Really, the whole thing is a big ol’ mess of no.

where do I even start….. the ex’s clown costumery, the weird parental vibes, the bf ignoring the obvious ongoing attachment that’s being expressed here, the fact that if I was given a lovey ass note from a boo written by an ex he would have to catch these figurative hands… https://t.co/nVgL3QYDQK

this is weird as hell but go off

Sumn about this don’t sit right with me

Same I literally was thinking that the whole time

And some people theorized Jacob wrote the damn thing himself.

LOL he clearly wrote this himself https://t.co/hCucM3AHPM

He wrote himself lol

BUT! Some people really found this super sweet, which just goes to show you, it really does take all types.

She knows that much about you because she paid attention because she loved you enough to want to know everything about you. I wish at least ONE of the guys I’ve ever dated would’ve taken the time to know even half of this about me. This kinda stuff doesn’t happen often enough.