Happy Friday, and welcome to our “People We Regret To Inform You Were Cancelled This Week” series. It’s exactly what it sounds like, though there is a disclaimer: These wrongdoers by no means exist on the same spectrum of moral corruption.

Some are worse than others. Some are individuals and some are groups and some are brands. Some committed crimes so heinous they deserve to be shipped off to another planet whereas others just… kinda blew it. Some are cancelled for a day, and others for eternity. This is subjective. Don’t @ me.

Presidential candidate and US senator Cory Booker appeared on BuzzFeed News’ AM to DM Thursday morning to discuss his fight to legalize weed.

At one point Booker was quizzed about cocktails, and specifically what goes into a margarita. Booker replied: “Um, so, margarita, there’s fruit, and there is ice, and there is…uh, vodka,” before someone off camera corrected him.

Booker doesn’t drink and for that reason is only cancelled for like, the day (which technically was yesterday, so he’s already uncanceled). He may not know that margaritas are made with tequila, orange liquor and lime juice, but he probably knows how to roll a blunt—or at least supports those of us who do—and that, my friends, is what it’s all about.

Here he is AGAIN, in 2012, when @RepMarkMeadows was asked if he would confront Obama over not being born in the United States, he said "We will send him (Obama) back home to Kenya or wherever it is." Yes @repmarkmeadows – you are a racist and have been for a very long time.

He did this by inviting Trump associate and black person Lynne Patton to the hearing as evidence of Donald Trump’s non-racism.

“She says that as a daughter of a man born in Birmingham, Alabama, that there is no way that she would work for an individual who was racist,” Meadows said to Cohen.

“Just because someone has a person of color, a black person working for them, does not mean they aren’t racist,” Rep. Rashida Tlaib (D-Mich) argued, comments to which Meadows took great offense and asked to be “stricken from the record.”

Because he took Tlaib’s comments to mean he himself was racist, Meadows explained that he has black nieces and nephews therefore he can’t possibly be racist. He then called Tlaib racist because she called him racist.

“There’s nothing more personal to me than my relationship – my nieces and nephews are people of color,” said. “It’s racist to suggest that I asked [Patton] to come in here for that reason.”

Within hours, videos from 2012 began to circulate in which Meadows talks about sending President Barack Obama “back home to Kenya or wherever.”

1. Mark Meadows owes Barack Obama an apology.
2. He should unequivocally condemn his past statements.
3. If you wonder how Trump got elected, watch this video.
The ignorance and racism contained in the question, the audience laughter and the candidates’ response is horrifying. https://t.co/fUa2fnEZbH

Cringiest moment in #Oscars HAS to go to Ashley Graham getting SHUTTDOWN by Lisa Bonet when she asked Jason to do a tribal yell. Yikes. ???

Graham mimics the dance as she prods Momoa to perform his culture, causing Momoa’s wife Lisa Bonet to quickly shutdown the interaction, saying: “We’ll skip that.” To call it awkward would be an understatement. It’s excruciating to watch. 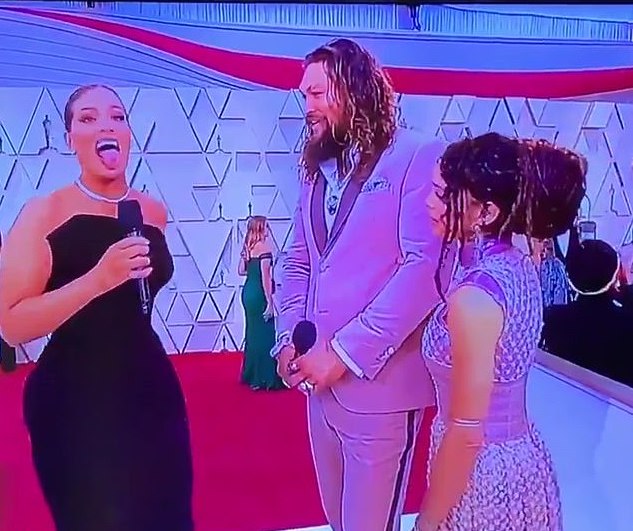 What makes it even more excruciating is the knowledge that Jason Momoa isn’t even Maori (though he is Hawaiin, which is in Polynesia, and he did perform a Haka at the Aquaman premiere.)

The Grapevine‘s Michael Harriot explained the issue here ideally when he said that nobody was particularly “outraged” by Graham’s request, it was just a disturbing and telling moment. “To White Lady Ashley, Jason Momoa wasn’t a man,” writes Harriot. “He wasn’t even the superhero who can breathe underwater or the mythical king of the Dothraki. She reduced him to an ‘other.’ A thing. An exotic vessel whose purpose is to provide temporary joy.”

Ashley Graham asking Jason Momoa to do the Haka at the Oscars irked me so much.

“Oh hello ethnic person, do your ethnic tribal funny dance for us on the red carpet.’

I’m glad my sister-wife intervened. She wasn’t having it.

I mean. Ashley Graham is generally unproblematic and has been a healthy role model for curvy girls for some years now. Does this excuse, explain, or justify her behavior in any way? Nah. But, as a white person, it isn’t my call to deem her “cancelled,” either.

Former attorney Franklin Baxley sent a video viral on Thursday in which a Massachusetts woman is seen calling the Attleboro police because Baxley’s dog humped hers at the dog park. Seriously.

So this lady call the police on my cousin because his dog humped her dog ???#DogParkDiane pic.twitter.com/sjrxnkibkk

“You heard of BBQ Becky? Because this is the newest one, right here,” Baxley said, referencing the dozens (and dozens, and dozens) of instances in which white people call the authorities on black people for merely existing within their same general vicinity.

Dog Park Diane’s behavior was clearly racially motivated (“I am a responsible dog owner, and my dog is super friendly,” Baxley said, according to the Daily Mail. “Anyone who goes to that park regularly knows me and will attest to that fact. … The dogs were living their best lives the whole time), and as such, she is cancelled forever. Screw you, lady.

5. Howard “Matt” Webb, AKA The Guy Who Dipped His Balls In A Customer’s Salsa

31-year-old-man Howard “Matt” Webb from Tennessee is facing felony charges after a Facebook video of him dipping his balls into a to-go container of salsa was reported to authorities, BuzzFeed News reported Wednesday.

According to the outlet, the video was filmed and posted by Chaneese Booker, former food delivery driver for Dinner Delivered. Webb was riding with Booker while she was doing her deliveries, and apparently ruined the salsa in retaliation for an 89-cent tip.

“This is what you get when you give an 89-cent tip for an almost 30-minute drive,” Booker says in the video.

According to BuzzFeed, Booker was immediately fired but Dinner Delivered’s general manager, Aliyah Wilson, “attempted to downplay the severity of the act, repeatedly calling it a ‘joke’ and claiming Webb’s testicles never actually touched the salsa.”

For that reason, Dinner Delivered is cancelled for eternity along with Matt Webb and Chaneese Booker. (If you don’t tip servers and/or delivery drivers, you’re cancelled too.)

Webb could face a sentence of 3 to 15 years in prison if convicted, reports the Daily Times.