Fantastic Beasts: The Crimes of Grindelwald has yet to hit theaters, but Potterheads have already torn teaser trailers apart for clues. It is generally accepted that the franchise, in following the misadventures of mazoologist Newt Scamander, will eventually open itself up as a Voldemort origin story.

Film trailers have shown that The Crimes Of Grindelwald is set to tell the long-awaited tale of the Dark Lord’s best friend and pet, Nagini, and J.K. Rowling revealed that Nagini was in reality a Maledictus, a woman with a blood curse which eventually and permanently transformed her into a beast.

A recent fan theory posed by u/soupycutie on Reddit expounded on this newfound fact, posturing that the original, human-version of Nagini was in fact Voldemort’s mother, Merope Gaunt. 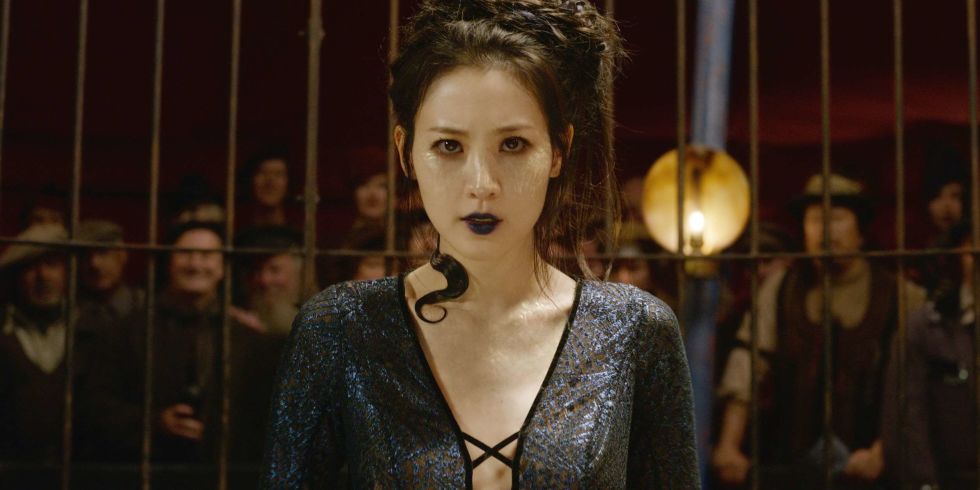 The theory invokes the Fantastic Beasts trailer and a passage from The Half-Blood Prince regarding Tom Riddle’s childhood. As per the former, we see Nagini as the “snake girl” at her job at Circus Arcanus, a traveling circus and freakshow. At this point in time, the blood curse seemingly hadn’t yet taken full and permanent hold, allowing Nagini to transform from human to snake at will.

The theory then pivots to the description of baby Tom Riddle by Mrs. Cole, the woman in charge of the orphanage in which Dumbledore discovered the legendary antagonist:

“I remember she said to me, ‘I hope he looks like his papa,’ and I won’t lie she was right to hope it because she was no beauty — and then she told me that he was to be named Tom, for his father, and Marvel, for her father — yes, I know, funny name, isn’t it? We wondered whether she came from a circus.”

This would explain Merope Gaunt’s unsightly appearance—The Maledictus’ curse would cause her to become more and more snakelike with each passing day. Perhaps she gave up her son before the blood curse had an opportunity to permanently alter her physical form.

“So this could be a coincidence, but it seems Rowling may already have had the idea that Merope/Nagini was part of the Circus Arcanus. Perhaps Merope was looking ugly due to her upcoming permanent transformation into a snake.”

It would also be more than thematically appropriate for Voldemort’s mother to take the form of a serpent.

“Perhaps Merope gave her child to an orphanage before faking her own death and running away so she would not harm her child after her snake transformation. The Gaunts after all are descended from Salazar Slytherin—what better family to carry a snake curse?”

Nagini as Voldemort’s mom slides several details into place. It would explain why he would trust Nagini enough to turn her into a Horcrux. It would also explain why drinking her venom in Goblet of Fire would sustain and nourish him in his gnarly baby form.

The motherly symbolism in that whole rebirthing/milking portion is difficult to ignore, and could be responsible for Voldemort’s exceptionally serpentine vibe when he “grows up” and gets his powers back.

Fans were quick to poke holes in this theory. For one, the lovely Claudia Kim, who plays Nagini, does not at all resemble the Marope Gaunt described in Half-Blood Prince. The former is at least part Asian, and the latter was described as homely nearly every time she was mentioned (not to mention the Gaunt’s incest-laden ancestry.)There is also the assumption that Mrs. Cole actually witnessed the death of Marope Gaunt, and the established canonical explanation that Voldemort’s terrifying/gross appearance was the result of shattering his soul as many times as he did rather than any sort of snake DNA.

And yet, if anybody could explain away all the inconsistencies in the theory, it would be the magical J.K. Rowling herself. In the meantime, we’ll be waiting impatiently until Fantastic Beasts: The Crimes of Grindelwald hits theaters on November 16th.