Now, there are some stories on Reddit’s r/AmItheA**hole subreddit that will make you appreciate your own life so much more, and this one from user u/poopgloves is one of them.

You might be able to tell from the name that this is about someone who wears poop gloves.

The person doesn’t identify their gender, but for some reason, I definitely think it’s a man! I guess that’s gender bias. Sexism is so ugly!

Read Also: Woman Asks AITA For Not Wearing A Bra To Work Despite Coworkers Requests

Anyway, the OP’s story is that they recently moved in with their girlfriend, who they call Sophie in their tale. Being new roommates, they’re discovering a lot of things about one another. One day, Sophie came in and asked about a pair of yellow gloves, set on a high shelf out of reach. The following conversation ensued:

So without thinking I said “Yeah, don’t touch them, they’re my poop gloves.” She said “Your f—king what.”

The OP says they’ve been using their poop gloves, or ones like them for their whole life while using the toilet, but had never told Sophie about it. Trying to tell her about it didn’t go well:

She was really horrified when I explained what they are. My hands get really dry and I have eczema, so it’s not good for me to be washing them all the time. When I was younger they would crack and bleed after washing them, so my Mum bought me some gloves and told me to wear them when I wee/poo, and take them off before I leave. I called them my Poop Gloves and the name stuck.

Sophie is disgusted that I don’t wash my hands. She doesn’t want them in the house, but it’s something I’ve always done and I really can’t be arsed with getting back eczema again. I think she’s being unreasonable.

The OP later clarified that they wear the gloves to wipe with toilet paper, the gloves themselves are not used to scrape poop off of anything. They’re technically toilet paper gloves, but that’s a longer name, and speed is of the utmost importance in the bathroom, I guess. Despite the absurdity of this lover’s spat, people did take the problem seriously in the comments, coming up with potential solutions.

Commenter PartyCat78 wrote, “While your reasoning is understandable it’s still highly unsanitary to keep and repeatedly use a pair of gloves. Every time you put them on, you’re touching them, and they are potentially poopy. Then they are stored in your bathroom. I understand her being grossed out. My suggestion would be to get disposable gloves. A box should last quite a while unless you poop multiple times a day.”

Read Also: Woman Asks AITA After Not Happily Donating Her Organs To A Family Friend

User Derigiberble agreed disposable gloves could work but had another suggestion. They wrote, “I feel the real solution here is a bidet. The fancy ones have features like a seat warmer and multiple spray patterns, and should be a hit with the gf too.”

Some people were unhappy that disposable gloves were even suggested, saying they were terrible for the environment. Redditor truthsayer123456 pointed out, “He can wash the gloves the same way he would wash his hands.”

So I’m not the only one thinking this person is a he.

But the advice that might actually change the OP’s life if they read it came from fellow eczema sufferer HowsYourGirlfriend, who wrote, “I’ve also suffered from bad hand eczema, and this is not a good solution. Go to the dermatologist and get them to actually prescribe medication for it – I suffered for like 6 months before having it go away in 2 weeks with steroid cream. Also advice per the dermatologist – use hand sanitizer instead of soap, it won’t irritate your hands in the same way. Throw out the poop gloves, and start a routine of rinsing, hand sanitizer, and then aloe vera and I think your girlfriend and you will be much happier. Definitely keep a pair of gloves for washing dishes though, that’s the worst.” 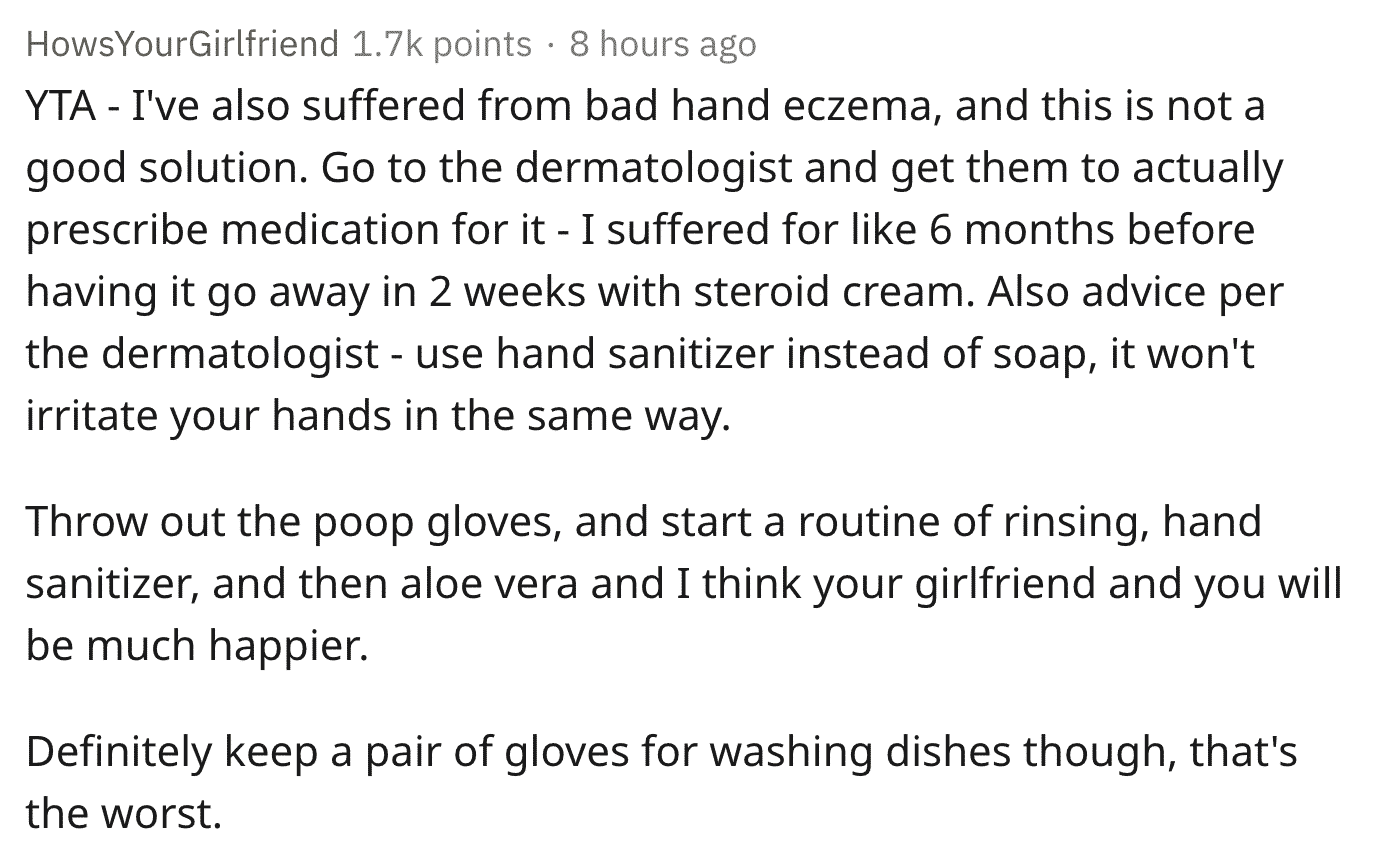 Hope these two crazy kids work this out.