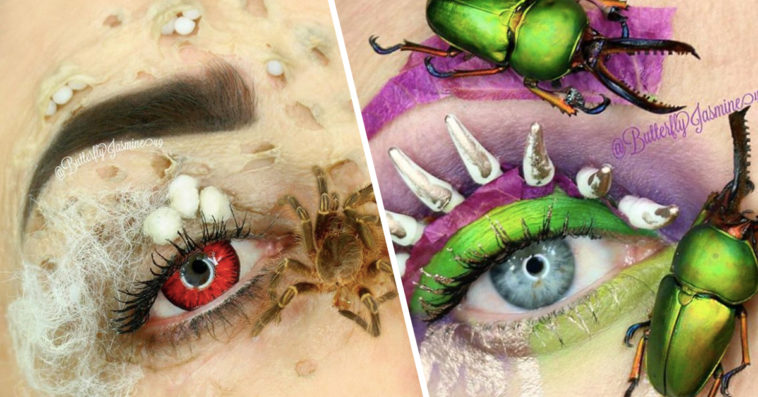 Thanks to Instagram, Snapchat, and YouTube, it’s easier than ever for makeup artists to get people to notice their skills. Still, though, certain things are going to stand out more than others—like putting actual insects on your face and incorporating them into the overall look.

She’s an amazing makeup artist all around, but her specialty is working with real (dead) insects to create beautifully creepy lewks.

‼️REAL PRAYING MANTIS‼️ Found already dead and sent to me by @herbonyxwitchery ?? FUN FACTS- A praying mantis has two large, compound eyes that work together to help it decipher visual cues. But strangely, the praying mantis has just a single ear, located on the underside of its belly, just forward of its hind legs. This means the mantid cannot discriminate the direction of a sound, nor its frequency. What it can do is detect ultrasound, or sound produced by echolocating bats. Studies have shown that praying mantids are quite good at evading bats. A mantis in flight will essentially stop, drop, and roll in midair, dive bombing away from the hungry predator. Not all mantids have an ear, and those that don't are typically flightless, so they don't have to flee flying predators like bats. Try to sneak up on a praying mantis, and you may be startled when it looks over its shoulder at you. No other insect can do so. Praying mantids have a flexible joint between the head and prothorax that enables them to swivel their heads. ??????????? #prayingmantis #insectsofinstagram #insectart #insectmakeup #creativemakeup #cutcrease #purpleeyeshadow #avantgardemakeup

Ahumada says that bugs she uses were gotten through humane means—she’s not just going around killing whatever she finds.

‼️REAL FLIES‼️ Source- Found locally, already dead. Fun Facts- Unlike human beings, house flies have compound eyes. These intricate eyes provided them with nearly a 360-degree field of view, which allows them to see behind themselves. Unlike ours, the eyes of a house fly don’t move. Being able to see in all directions allows them to navigate while also being on the lookout for danger. Studies show that there’s a specific region within the eyes of a male fly called the "love spot." It is pretty much used for detecting and chasing female flies. This "spot" is located within the dorsofrontal region of their eyes. This is typically used to detect small target motion, however, males also use it to stay “locked onto potential mates during aerial pursuit.” ??????????? Products Used @mehronmakeup SynWax and Spirit Gum. @bennyemakeup Fresh Scab blood and Bruise Wheel. Maggots- made with @ellimacssfx Ellimorph plastic @maccosmetics Shadows for skin “irritation” ??????????? #maggots #flies #triggered #grossmakeup #maccosmetics #bennye #mehronmakeup #mehrongirl #gore #blood #eyeart #insectmakeup

She told Popsugar that she either finds the bugs dead, or gets them from Petco where they’re sold as food for reptiles, and the Daily Mail reports that she sometimes buys them online.

She includes the source of the insect in the caption, along with some information about it.

‼️REAL BEETLE‼️ Pink Headed Jewel Beetle SOURCE: Etsy Shop: InsectArt FUN FACTS: The iridescence common to these beetles is not due to pigments in the exoskeleton, but instead is caused by structural coloration, in which microscopic texture in their cuticle selectively reflects specific frequencies of light in particular directions. This is the same effect that makes a compact disc reflect multiple colors. ????????? Products Used @mehronmakeup paradise paints. Lashes from Amazon #jewelbeetle #creativemakeup #makeupinspiration #makeupispo #eyelook #eyemakeup #tattooideas #pixelart #cutcrease #insectsofinstagram

People’s reactions to the finished looks are all over the place. Some people love them, while others comment that they find the whole thing disturbing. One person commented, “Your makeup skills are 10 on 10 but why do you ruin it with those creeps!!! That looks gross.”

If you’re looking to recreate these looks yourself, Ahumada has some advice for you. She told Popsugar, “Stay as sanitary as possible. Place a barrier between the skin and bug.” Jasmine herself uses “gems and thick coats of lash glue” to keep her skin safe from the insects.

‼️REAL BUTTERFLY‼️ Monarch Butterfly SOURCE: Etsy shop: BicbugsLLC FUN FACTS: Monarch butterflies store a poison called Cardiac Glycosides that they had ingested by feeding on the leaves of the milkweed foliage in their larva stage. These are sometimes harmful to its vertebrate predators, but ineffective on invertebrate predators. The toxic effect on vertebrates however, depends on the level of intake. These toxins provide these butterflies with a poisonous defense against its predators such as lizards, birds, and frogs. They have a broad spectrum  perception of colors and can see even the UV light that humans cannot. ????????? Products Used @mehronmakeup paradise paints. @colouredcontactsuk Orange werewolf lens. ????????? #eyeart #facechart #eyelook #insectagram #insectporn #insectart #makeupinspo #makeupart #creativemakeup #nature #phobia #eyeshadow #eyeball #motd #faceart #triggerwarning #facepaint #editorialmakeup #avantgarde #darkart #tattooideas #macrophotography #eyemakeup #falselashes #eotd #butterfly #monarch #monarchbutterfly #artporn

Ahumada doesn’t only do makeup creations with bugs, she’s also got other looks on her Instagram account, but it’s definitely the ones with bugs that bring her the most attention.

‼️REAL INSECTS‼️ ????????? Praying mantis (ft. Wasps and a tiny fly, do you spot the fly?) ????????? Praying Mantis SOURCE: Praying Mantis Found Locally(already dead) and the wasps were sent to me by my instabestie @ignitedbeauty FUN FACTS: The praying mantis is so named because when waiting for prey, it holds its front legs in an upright position, as if they are folded in prayer. Don't be fooled by its angelic pose, however, because the mantid is a deadly predator. If a bee or fly happens to land within its reach, the praying mantis will extend its arms with lightning quick speed, and grab the helpless insect. Sharp spines line the mantid's raptorial forelegs, enabling it to grasp the prey tightly as it eats. Some larger mantids catch and eat lizards, frogs, and even birds. ????????? Products Used @mehronmakeup 3D Gel. ????????? #eyeart #facechart #eyelook #insectagram #insectporn #insectart #makeupinspo #makeupart #creativemakeup #nature #phobia #eyeshadow #eyeball #motd #faceart #triggerwarning #facepaint #editorialmakeup #avantgarde #darkart #tattooideas #macrophotography #eyemakeup #falselashes #eotd #prayingmantis #mantis #carnivoroustagram #deadly

So what do you think? Beautiful or too weird?