One woman was so eager to get married, she sent out her wedding invitations—before her boyfriend had even popped the question.

According to an anonymous post shared by a “worried” friend who’d gotten an RSVP for the big day, the bride-to-be had begun to plan her wedding after a Facebook quiz “predicted” she’d be married within the year.

The friend wrote in a post shared by The Sun: 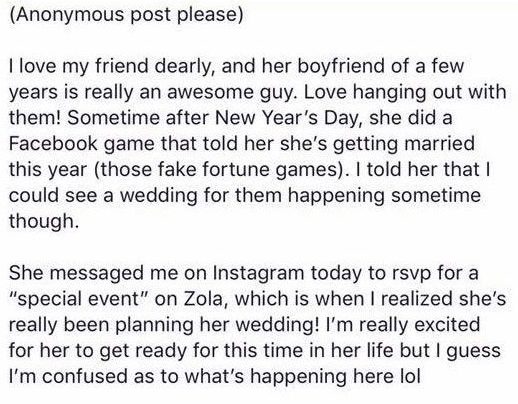 The Facebook post evidently drew confusion from other friends of the bride, who admitted that they were also in the dark.

One person wrote, “Why do people plan their wedding BEFORE BEING PROPOSED TO?!”

Another asked, “Does this poor man know he is getting married?”

This commenter pointed out that the weird thing about this situation wasn’t the wedding planning aspect, but the sending out RSVPs to a non-event aspect.

Lastly, someone posited this theory, which actually makes a lot of sense: 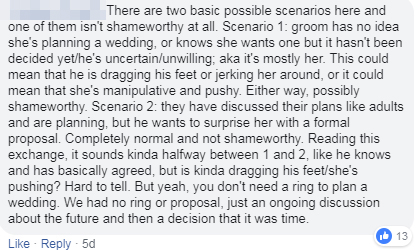 Whatever the case, we sincerely hope this fellow knows what he is in for.