When it comes to memes, we’re usually dragging someone, or making a fool out of ourselves when we make them. There’s hardly a time when a super pure and wholesome meme goes viral–let’s face it, we love hating on ourselves.
Artist Rachel Greenberg, however, created a wholesome cartoon of Humpty Dumpty–everyone’s favorite childhood clutz–having a pretty fantastic Fall. The cartoon is a play on words of the nursery rhyme, in which Humpty Dumpty had a great “Fall,” of course, literally–and cracked his head open. However, Greenberg had a much more pure imagination of the word “Fall.” 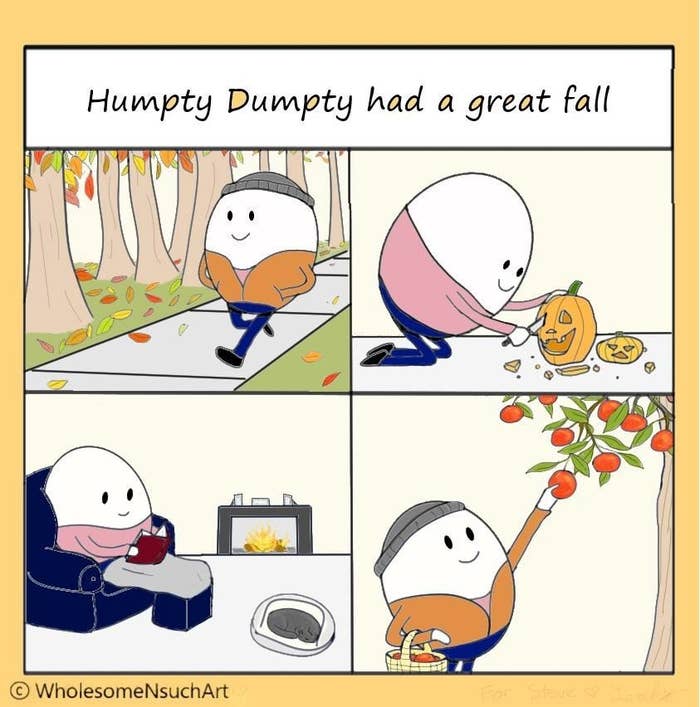 People were leaving comments like saying how wholesome and pure it was, and how it was exactly what they needed.

Greenberg, the original artist, told BuzzFeed that she didn’t expect the cartoon to go as viral as it did.

It was popping up on every social media site and most people didn’t know the source. It’s been kinda like yelling at a train after it’s left, trying to get the whole internet to know it was me who did the comic but that’s okay. So, so many people have helped me by commenting that I’m the artist and linking my page or my other social media. It’s been amazing! Especially my best friend, Caroline. She’s been cheering me on this whole time and commenting my credit everywhere she finds it. Most people who posted it without credit have been really good about editing it to add my link too.

And, she thanked everyone for sharing it.

We love us some wholesome art.