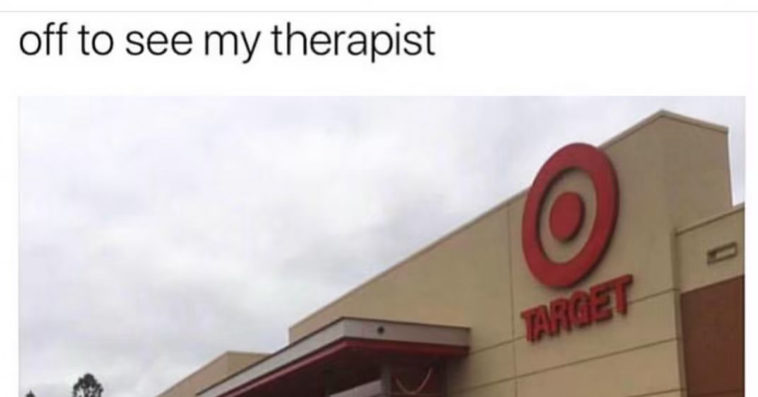 No matter how crazy your day has been, there’s one thing you can always count on: Target. Target is there for you when nothing else makes sense. Target doesn’t ask questions, it simply exists to spark joy and drain your bank account.

If you have a borderline unhealthy obsession with Target like us, each and every one of these tweets will speak to your soul as you cruise through the dollar section.

My wife hates snakes. But if they sold snakes at Target, we'd probably have a few snakes.

I hate it when the cashier at target says "see you again soon!" Like, bitch, you're not wrong, but did you have to say it

I walked into #Target with a list of 5 items and walked out with only those 5 items. The manger stopped me and said he had never seen that happen before

No one goes to target because they need something. You go to target and let target tell you what you need.

If you can go into Target and get ONLY what you went there to get…I applaud you. Your self discipline is out of this world. A true King or Queen. Incredible. Talented. Committed. You deserve the world.

me at target on saturday night buying myself a bottle of wine and a $5 movie. self care saturdays i guess

*looks at random item from dollar section at target*
I dontttt know why but I feel like I need this pic.twitter.com/DnD5PW90d1

Me at Target the day after payday pic.twitter.com/3GOnHKRcwF

MY DOG WENT TO TARGET AND LOOK HOW HAPPY SHE IS pic.twitter.com/Cdt2s2aI3p

TARGET MGR: Ma'am u can't host a party her-

ME: shhh. I live here now

drunk shopping at target should be an extreme sport

There’s nothing like building your savings account for college for years and spending it all at Target within 3 months!!!

I’m a stay at Target mom

no one:
me at target: yeah okay fuck it i’ll spend 90 bucks

I’m convinced it’s impossible to go to Target and not come out with something you didn’t plan on buying ?

target cashier: did you find everything okay?
*me unloading a full cart*
first of all, i came here for dish soap & i didn't even get it

When after you get done at Target.. you have to decide which bill isn’t getting paid. pic.twitter.com/W0x28yVCLt

Saw a little girl at Target with her hair all messed up, crying and screaming “don’t look at me.”

I could totally relate.

If you ever find a significant other that goes to Target with you, whenever you want, never let that person go. They're a treasure.

Time heals all but so does a bottle of wine and shopping spree at Target.