Warning! This post includes spoilers for episode five of season eight (“The Bells”) of Game of Thrones!

As you’ve probably heard by now, if you’ve been following the Game of Thrones season eight saga at all, a lot of fans are not happy with how the season has been going. They feel that the action is rushed and not even attention is being paid to character development. There have also been complaints of misogyny because Daenerys Targaryen, Mother of Dragons, has all of a sudden gone full-on Mad Queen basically out of nowhere.

Some people are so unhappy, in fact, that they’ve actually started a petition on Change.org demanding that the HBO completely redo the season with different writers. And over a million people have signed it.

Of course, the petition is actually useless and not going to accomplish anything, because the season has been made and that’s that. And one poison who pointed that out was Riverdale star Lili Reinhart.

Thank you to everyone at #asosmagazine for being so down to earth and making this shoot really special ?

A petition by an angry fan demanding that HBO remake the final season of #GameOfThrones has now been signed by more than 450,000 people. Link in bio for the full story.

Her comment read, “This is not how television works… TV shows are not fan service. It’s ridiculous of people to think they can demand creative change from artists.”

Reinhart’s comment was soon reposted by Comments by Celebs, where people began to weigh in on their feelings not just about the show, but about Reinhart’s words.

Some people pointed out that they think that TV pretty much IS fan service. As in, without the fans, there would be no TV show.

And other people said the point wasn’t to really get HBO to redo the season, it was just to show them how dissatisfied they were with the way the show turned out.

A few people pointed out that Riverdale itself heavily includes the fans.

One person brought up the fact that Sonic was changed after fans complained.

And apparently there was a petition to cancel Riverdale, too?

But other people felt that changing things when fans complain would be a dangerous step in the wrong direction. 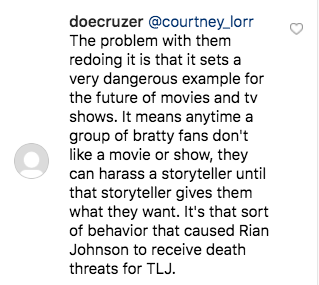 Well, soon this petition will just be a memory, since the final episode of Game of Thrones airs tonight and everyone will have to just deal with it.