The actress retweeted an article from The Hollywood Reporter about Pratt’s appearance on Stephen Colbert’s The Late Show which was captioned “Fresh from fasting, @prattprattpratt talks about his spiritual side.”

Page—who is openly gay, and who recently gave a powerful speech on Colbert denouncing Mike Pence for his role in galvanizing hate against LGBTQ people—was having none of it.

“Oh. K. Um. But his church is infamously anti lgbtq so maybe address that too?” replied Page.

Oh. K. Um. But his church is infamously anti lgbtq so maybe address that too? https://t.co/meg8m69FeF

Pratt identifies as a non-denominational Christian and attends services at the Zoe Church and Hillsong, favored by the likes of the Biebers, the Kardashians, the Jonas’ and more. (The Cut featured a fascinating and in-depth profile on the Hollywood Evangelicals last August, in case you’re curious to see how deep the rabbit hole goes.)

Page’s fans applauded her for speaking out against the church, which has a long history of anti-LGBTQ behavior.

In a 2015 interview, Hillsong’s leader Brian Houston wrote a blog post on the official Hillsong website in which he maintained that while his church welcomes all people, it does not approve of gay people.

“Put clearly, we do not affirm a gay lifestyle and because of this we do not knowingly have actively gay people in positions of leadership, either paid or unpaid.

“So if you are gay, are you welcome at Hillsong Church? Of course! You are welcome to attend, worship with us, and participate as a congregation member with the assurance that you are personally included and accepted within our community.”

“But (this is where it gets vexing), can you take an active leadership role? No. ‘This won’t make everyone happy and to some, this stance may even be seen as hypocritical. We are a gay welcoming church but we are not a church that affirms a gay lifestyle.” 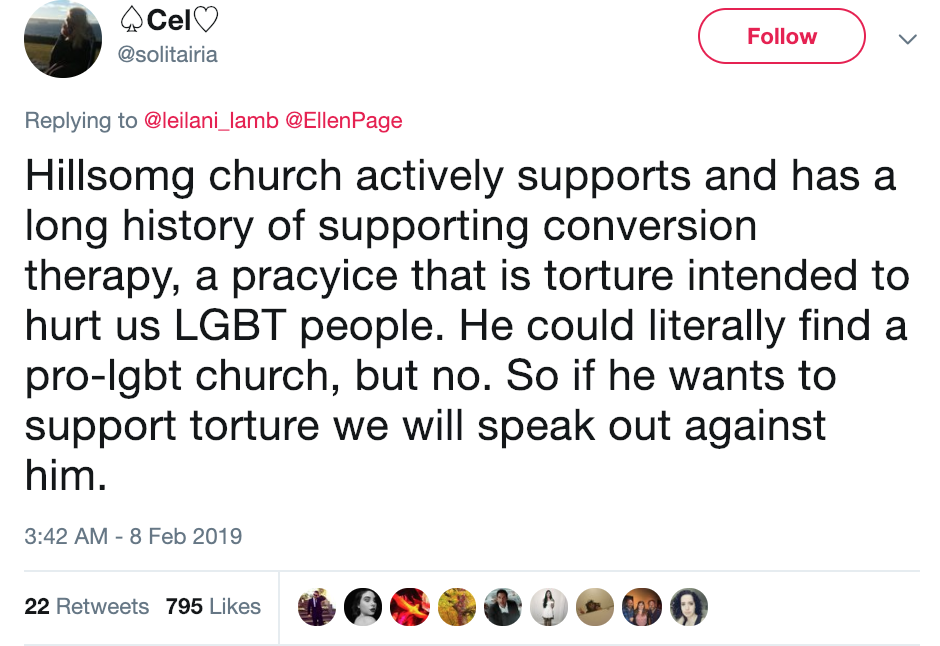