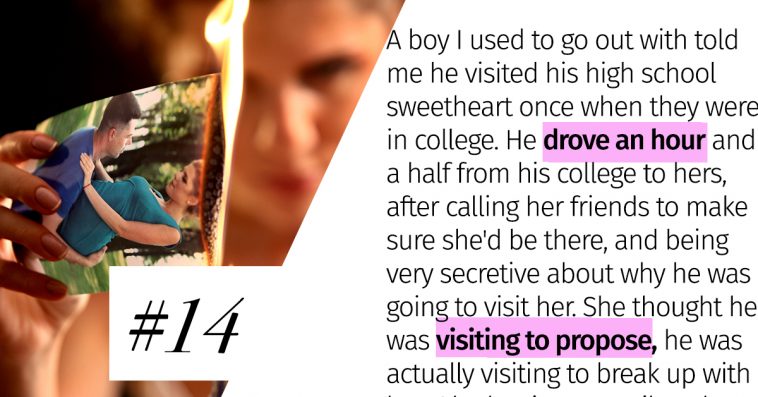 Deciding to break up with someone can be pretty stressful. Not only do you have to completely cut someone out of your life, but you try to do so in the least painful way possible. While some breakups are amicable and agreed on, there are others that completely blindside the other person.
What are you to do when your breakup plan doesn’t exactly fall into place? Well, improvise, of course. BuzzFeed users shared their traumatic stories of how their breakup didn’t exactly go as planned–and, maybe it’ll help you come up with 4 different backups for when you dump your significant other.

I dated a guy for 3 years (I think it was that long…it’s been forever since then), he sprung the idea of him going away for 3.5 months to work in Wyoming, but it was just for the summer and he was always promising he’d come back. Not even a month into it we were talking about how difficult the long distance was, but we would talk about it the next morning. Long story short, I literally did not speak to him for an ENTIRE month because he repeatedly told me his phone “didn’t work anymore”. He changed his Facebook status to single and then posted pictures of him with his new girlfriend. Oh. Ok. Thanks for the heads up, ass. And he also literally never made it back to town that I’m aware of. Hindsight, best thing to EVER happen to me. He was the worst.

Had this boyfriend in college who was super clingy and the worst kisser in the entire universe. I broke up with him over the phone and he called and texted all night. 7am rolls around and low and behold he shows up at my house with a McDonald’s bag and an apology letter that equated my love to “smooth pudding”. He finally got the hint we were over when my mom went out and told him. Never heard from him again. I also ate the McDonald’s (which was cold). And my sister still refers to me as “Smooth Puddin'”

My first real relationship (back in high school) was incredibly unhealthy, but I felt trapped in it because of my partner’s emotional issues. I dragged it out way longer than necessary and we were both miserable, so our mutual friend finally put her foot down after watching from the sidelines for WEEKS and told me to end it. Emboldened, I caught my girlfriend before she left for the day and told her that I needed to talk to her in private. No matter what I said, she insisted that I say it where we already were, in the crowded band hall. Once I broke the news to her, she was livid and sobbing all at once. She screamed at me for dumping her in front of our acquaintances and moved in like she was going to push or hit me or something. So I ran the fuck out of the building. I didn’t stop until I reached the Starbucks down the street. I sat there for hours, TERRIFIED that her or one of her friends would storm in looking for me. She never followed, and so began my Starbucks addiction that persists to this day.

A boy I used to go out with told me he visited his high school sweetheart once when they were in college. He drove an hour and a half from his college to hers, after calling her friends to make sure she’d be there, and being very secretive about why he was going to visit her. She thought he was visiting to propose, he was actually visiting to break up with her. Oh also, it was April Fools’ Day, so he maybe should have looked more closely at the calendar.

My boyfriend broke up with me while we were at Disneyland. A man saw me sobbing and asked if I was ok. Through my sobs I said “he dumped me” while pointing to my boyfriend. Apparently the man thought I said “he punched me” as he immediately went over to my boyfriend and punched him right in the middle of Cars Land. Disneyland police had to haul both of them to Disneyland jail.

I tried to break up with my (ex)boyfriend and he started having a seizure. At the hospital his parents kept saying how they were so happy that he had someone like me in his life and had to break it to them that I had been trying to break up with him.

This was in the 10th grade, and I had been dating my (now ex) boyfriend for almost three months. So our relationship was good and everything, until one day I found out that he had been cheating on me from a friend. So I decided to break up with him over Instagram. I posted a cute selfie and captioned it “Love being single!”. My boyfriend saw it of course, and proceeded to reply with “LOL AUTOCORRECT!”, apparently, he thought I meant to type “love pringles” or something. When he found out the truth he sent me videos and pics of him kissing another girl who he was cheating on me with.

I had been seeing this guy for a couple months, he was very sweet but quite a bit older than me and quite obviously (to me now, at least) an alcoholic. One night, I invited him out to a bar with my best friend and her boyfriend. He was already there when we arrived and so drunk that he must have forgotten he was even supposed to meet me there. After 30 minutes of him not approaching me, I finally went up to him and told him this wasn’t going to work out. His words were so drunkenly slurred, I couldn’t even make out what he was trying to say to me. The next morning, he called me but I didn’t answer. He left a voicemail saying he had almost just been arrested after waking up in his after drunkenly falling asleep before he could drive home. He said he would see me that night for plans we had previously made, obviously forgetting I had broken up with him. I never spoke to him again.

I’m in my bedroom in a college apartment with my ex, trying to break up with him. He’d failed out of school, was moving to further away because of it, and I felt like I’d moved on. He’s telling me he’ll change and that he will go back for his degree, work harder, etc. to keep me. Cue my roommate/best friend start blasting Taylor Swift’s “we are never getting back together” just in time for the chorus (she knew I was breaking up with him). He breaks down crying even harder, I’m laughing now because how can I not. And my roommate offers him cookies on the way out.

I was away visiting a friend from college and my then boyfriend, now ex, was nonstop messaging me and calling me. I tried to explain that I wanted to spend time with my friend who I rarely see instead of talking on the phone with my boyfriend who I see fairly often. He didn’t get it so I blocked him to get some peace. Then 20min later I get a notification on Venmo from my boyfriend requesting the amount of the bill from our last dinner with the caption, “I see you are having too much fun without me. Since you clearly don’t care about communication and us consider this our breakup.” A few of my friends saw it on the Venmo feed and thought it was the funniest thing.

I’d been with a guy for maybe a week in middle school when I found out he was cheating on me with one of my friends, and saw them kissing at one of the lame middle school dances. We used to be able to pay a dollar to have the DJ announce whatever we wanted (within reason of course) so I had our break up announced to the entire school. I still cringe about it sometimes, but I’m also oddly proud of myself because I’m not always the most confident person.

My now-ex was leaving for a year long internship in another country so we spent his last few days in the states together. He was obsessed with Kristen Bell, so I offered to play Forgetting Sarah Marshall. We slept together after and he broke up with me while I was still nude. I wanted to die but now it’s hilarious. I thought I’d go to Hawaii one day and have that in common with Jason Siegel’s character. Never expected to share in his gut-wrenching misery of being dumped while nude.

Once I was dating this guy but broke up with him shortly after thanksgiving. He insisted on still exchanging Christmas presents because he already bought mine! So I crocheted him a scarf and when he opened it, he said it was the smallest scarf he’d ever seen. I told him it was to keep his dick warm. Asshole

Years ago, this one guy I was dating got WAY to weird and clingy WAY too fast for me. So after, a little more than a month of attempting to deal with it, I had the last straw when he secretly took a snapchat of him posing next to my ex (of course without my ex’s knowledge) at a concert and then proceeded to send it to me with the caption “LOL”. I had mentioned my ex once, by first name only, so I was a little thrown off and things got worse when I opened up instagram and saw that he had made the snap his default picture… Deciding that was it, I texted him that I think things weren’t working out and that I thought we needed to break up, to which he responded with: “Is it because you don’t like watching Two and a Half men with me??”

To this day it still boggles me since we never even talked about that show ever..

I broke up with my high school boyfriend at his house. Afterwards I realized he drove me there and I had to text my friend to pick me up (this was before the days of Uber and Lyft). She was less than pleased and said she would be there in 45 minutes. Me and my now ex had to sit there awkwardly for over an hour before my friend showed up. As I was leaving his mom said “leaving so soon?” And I had to lie and say I had plans. To say I ran out of the house would be an understatement…

I broke up with my boyfriend in a park. He climbed a tree to cry up there. I didn’t really know what to do so I kinda just waited for the next 10 minutes for him to come back down.

My highschool boyfriend calls me one night asking me if I knew who this chick was. When I said I did he asked me if it was ok for him to date us both at the same time. I broke up with him right there the next day a butterfly necklace was on my desk with a note of apology. I threw the necklace back at him. Cut to a few weeks later and the chick who was in my gym class was talking to me one day she pulled out the necklace that he gave to her. We both laughed and dropped it behind the bleachers.