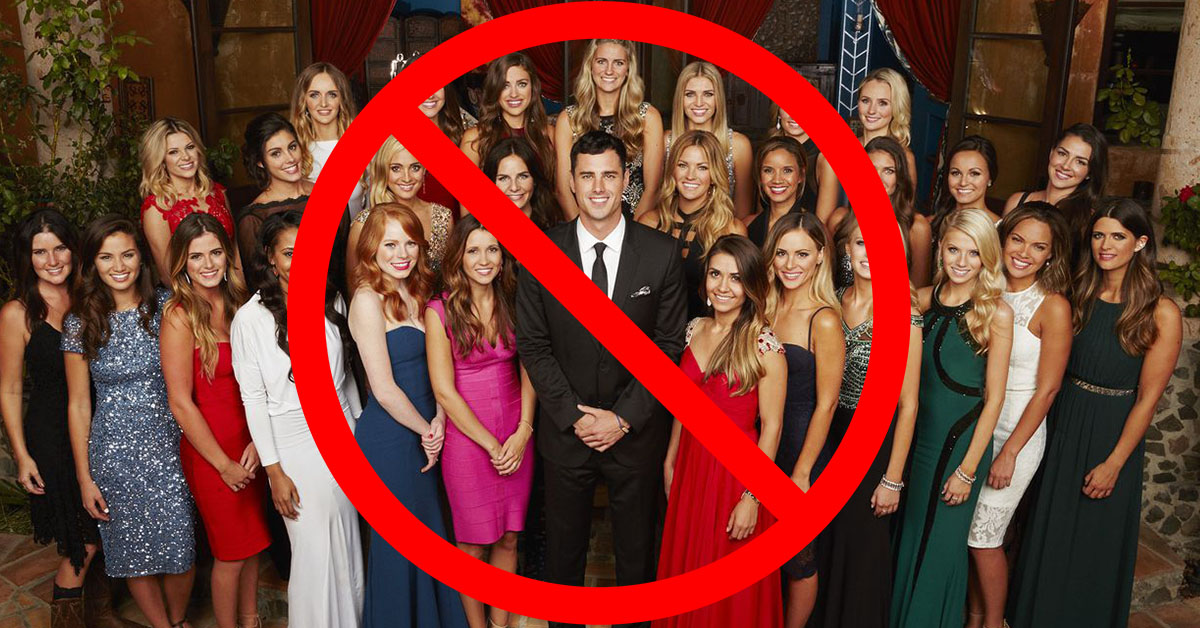 For years, I have had to suffer through conversations with my friends where they go on and on about The Bachelor and how amazing it is. They talk about contestants, they gossip about who they think will get “the final rose,” and they even have pools about who will make it to the end. Every single time, every single season, I have to prevent myself from shoving my finger so deep into my ears, that I go deaf so I never, ever have to hear about this godforsaken show ever again.
I truly believe that The Bachelor is the worst piece of dumpster fire trash I have ever heard about, seen, or witnessed on television in my entire life. The show, which has been on for over 10 years, still for some reason gets reviewers to tune in year after year to watch the same heap of trash. I will never understand why. The series, in itself, is completely toxic and unhealthy for anyone to participate in, or watch. Why? Simple:

Who the f**k wants to compete for a marriage?

My mom taught me from a very young age that you should never, under any circumstances, beg, fight, or plead for a man. If a guy wants to be with you, he will choose to be with you, and not make you fight your way to a marriage. Who the hell would want to have their marriage based off of competing against 30 other women anyway? This is going to be the father of your children, do you want your daughters growing up thinking the way to find your true love is by going on a reality TV show and competing for his affection? Get the hell out of here.

It pins women against each other.

Not only do you have to compete for a guy’s attention, but you have to stomp on other women to do so. If you’ve seen the show, you know that women get petty and caddy just to make it to the end. Why should we ever tear down another woman to get a man? That’s pathetic and desperate. Women should support each other, not gossip and sabotage each other for a bit of fame and a possible “faux engagement.”

It promotes the idea that women will drop anything for a man.

If you’re going on the show, you have to pause your entire life. That means your kids, work, family, friendships. You have to drop everything just to partake in a sad, sappy reality TV show that exploits you and makes you look like a fool–all to get a ring. It promotes this misogynistic idea in society that women will do anything to get married to a man. False. Maybe back in the day, but today, women are more powerful and independent than ever–and they damn well don’t need a man to get by.

It completely objectifies women and makes looks/sexuality the end-all, be-all.

No matter what season you watch, more likely than not, the women are all “blonde bombshells.” For some reason, The Bachelor perpetuates the idea that the “ideal woman” is a blonde, tan, medium-height female with light eyes and a southern twang. Not only does it promote unrealistic beauty standards and pigeon-holes women into being “one thing,” it also completely objectifies women. In multiple seasons, girls go above and beyond to be “slutty” in order to gain someone’s attention–see Season 19 where one girl whipped her top off to get a group date rose. It sends the completely wrong message to women saying: your looks and your body are the only things that matter.

It promotes unrealistic expectations of dating and relationships.

For all of those who worship this pile of sh*t, sorry to say you’ll be disappointed in your own dating life. Not every guy has his dates sponsored by a company, filmed for a TV show, and arranged by a bunch of producers. Sure, it seems romantic to go for a helicopter ride over a city and then have a private, catered, candle-light dinner on a field somewhere with fireworks spelling our your names in the moonlight–but that sh*t will never happen for you, sis. Most of the dates are so elaborately done for ratings, and women going, “awwwwwwww, #goals!” If you think that any relationship in your own life will be like that, seek immediate help.

If you know anything about love, you’d know that you can’t help who you love–or force love. You can’t seriously tell me that couples who end up together on the show, or even date on the show, are “truly in love with each other.” Love is something that can’t just be “turned on” overnight. With the show only filming for a few weeks to a few months sometimes, it’s hard to believe that the “engagement” is truly based on falling madly in love with someone. The two barely know each other–give me a grip.

If you know anything about reality TV, you’d know that the majority of things that happen are staged or forced by producers. Thankfully, the LifeTime show UnReal puts a huge spotlight on shows like The Bachelor to showcase that these women don’t just do the things they do without a push, or even a force, from production. Most of the men don’t pick who they truly want, and instead, pick who production thinks the audience will want–or need. The entire show is a giant “gotcha” to fans who think it’s all 100% real.

What’s with all the white women?

Year after year, there is hardly any difference in the “women pool” that get brought onto the show. For some reason, The Bachelor hates women of different races or ethnicities. When they do bring on women who aren’t white, it’s for the sole reason to seem as though they are not racist–but most women of color or exotic origin end up eliminated within the first week or two of the show entirely.

Once you appear on a TV show, you can do just about anything you want if you make a name for yourself. Sure, you may not get the final rose, but you can get social media endorsement deals out the a**hole because some women were “stanning” you on TV. Boring. Washed up. Pathetic. There are way more admirable ways to make a dollar than completely throwing yourself at a guy on TV and fighting with some women.

It is a bad example to set for young women.

Regardless if you don’t let your daughter watch the show, or your younger sister, or your niece–you still watch the show. You’re telling the younger generation of women that shows like this are okay, just because they’re entertaining. Sexism, racism, misogynistic tendencies, and objectification of women are okay because for an hour every week, you get your fix on entertainment. It’s a horrible, disgusting, and frankly, sad example to set for any girl, anywhere.

You should be teaching young girls that no man is worth throwing your whole life away over. That women should be building each other up, not gossiping and tearing each other down. That the man who is for her will choose her, above all, over anything else–and not make her compete with another woman for his life. That when she does get married to someone, it won’t be for fame and fortune. And, that she should teach her daughter the same lessons, to create a generation of women who won’t be seen as weak, pathetic, and sad.