A 35-year-old Australian man has come under fire for his misogynistic and “appalling” list of demands seeking a potential partner.

Shared to Facebook, the unnamed man’s posted included weight requirements (“no skinny-fat girls thanks), race requirements (“Caucasian or maybe halfcast something exotic”), and a breast size minimum (C cup)—among other staggering demands, like having an “innie” vagina (WHAT???)

A screenshot of the man’s Facebook post—which, by the way, includes a selfie of himself ran through a Snapchat/Instagram animal ear filter—was shared to UK parenting forum Mumsnet, where users branded the dude everything from a “twat” and “f**head” to “a prime example of douchebags out there.” 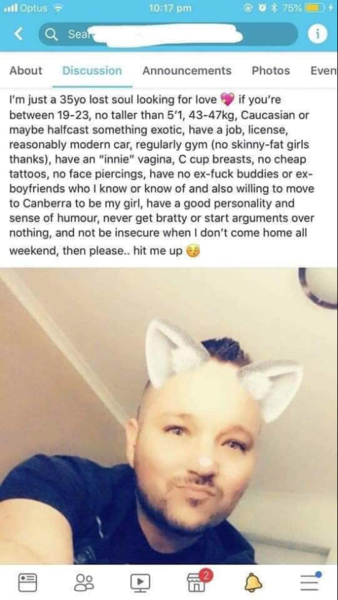 It reads, in full:

“I’m just a 35yo lost soul looking for love. If you’re between 19-23, no taller than 5’1, 43-47kg, Caucasian or maybe halfcast something exotic, have a job, license, reasonably modern car, regulary gym (no skinny-fat girls thanks), have an “innie” vagina, C cup breasts, no cheap tattoos, no face piercings, have no ex-f**k buddies or ex-boyfriends who know or know of and also willing to move to Canberra to be my girl, have a good personality and sense of humour, never get bratty or start arguments over nothing, and not be insecure when I don’t come home all weekend, then please…hit me up”

The “innie vagina” stipulation confounded commenters on Mumsnet, who asked, “surely every woman’s vagina is on the inside?”

While others wrote how they hardly noticed the “innie” comment as they were “distracted by his casual racism and his blatant misogyny.”

(The term “halfcaste” or “half caste” is a derogatory term describing a person of mixed race or ethnicity.)

On top of everything, the man wants the poor young woman to move to Canberra, where he presumably lives (and which one Redditor called “Australia’s most boring state.” I personally know nothing about Australian states and cannot weigh in), and for her to “not be insecure when I don’t come home all weekend.”

The man’s post also made its way to the ChoosingBeggars sub on Reddit, where there was again, plenty of confusing concerning the “innie” demand…

But where, as is typical for the site, roasting was at an all-time high.

Some people pointed out that the man may just have been making fun of the women who themselves post long list of demands on dating apps and websites, but if Hard Rock Nick has taught us anything it’s that THESE GUYS REALLY DO EXIST.