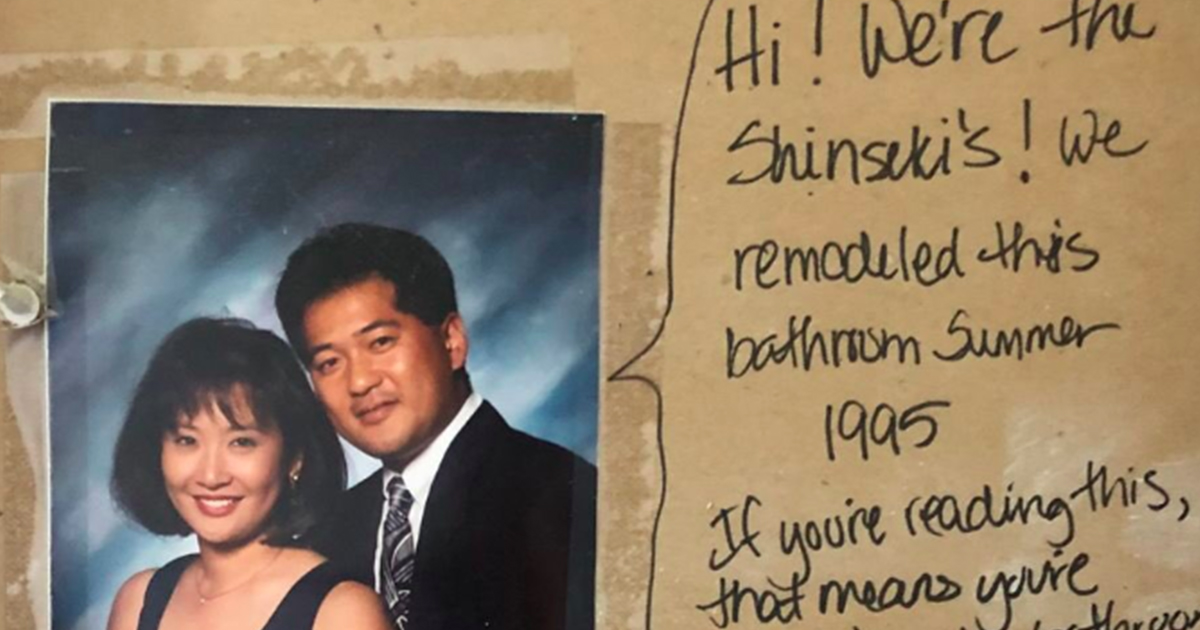 Remodeling a home is hard enough without its former owners gently taunting you.

Alex and Jess Monney, a married couple from San Francisco, were in the middle of redoing their bathroom last week when their contractor discovered a little surprise left by the previous homeowners, who had upgraded the bathroom in 1995.

According to the contractor, hidden inside the wall was this note:

“If you’re reading this, that means you’re remodeling the bathroom again. What’s wrong with the way we did it?!?!? Ouch.

And if that wasn’t bad enough, the Shinseki’s pet bunny also got in on the action.

The original Tweet from Alex Monney (below), which had gotten over 100K retweets, has since been taken down. But…

…here’s a Tweet of the bathroom as the Shinsekis remodeled it, in case you were curious and wanted to pass judgment on the Monney’s and/or the Shinseki’s sense of taste:

If you know me, you know I love house projects. However, even I think I might be a little crazy for kicking off a bathroom remodel 4 weeks before I’m due. Bye bye bathroom! ?? And sorry in advance for the bathroom remodel updates to come. pic.twitter.com/yCJJN0A0KL

Naturally, the sleuths of the internet quickly went to work on putting the Shinseki family in touch with the Monneys, and Thursday Mashable confirmed that Alex Monney had been in touch, telling them:

“Your bathroom, and home, is lovely. It has given us a lot of beautiful memories and we can’t wait to raise our little baby girl here. Sorry we’re changing the bathroom, but the shower is too small for me to fit in (I’m 6′ and my wife is 5′). Thank you for the amazing surprise!”

As the story spread it prompted awesome responses…

this is the biggest power move ive ever seen pic.twitter.com/q5uPeA2WAC

And others have come forward sharing pictures of things they found behind their walls when remodeling:

My wife and I bought our first home last summer. Had to cut a hole in the bathroom wall to install a vent. Here’s what we found behind behind that wall ? pic.twitter.com/AU2Y4OhKEB

We found this while doing our bathroom! Totally forgot to add to it before the guys finished the new wall though ? pic.twitter.com/rAaupz6clj

For once I’m actually glad the internet went out of their way to blow a story up. I know if I’d planted this little time capsule 25 years ago I’d lie awake some nights, wondering if anyone had seen it — the Shinsekis can now rest easy though because millions have.