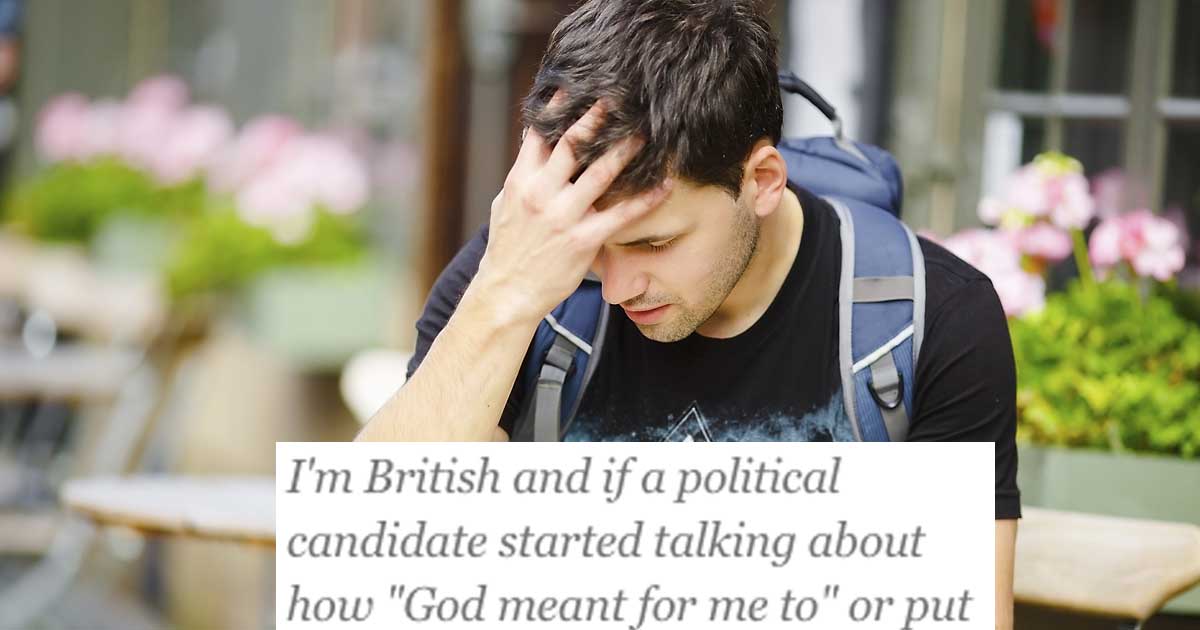 It’s time to revisit one of our favorite topics: the many things that surprise foreigners the most about the good ole’ US of A. This handy Reddit thread asked people from other places (ew!) as well as well-traveled patriots to share the things that would “shock non-Americans” but wouldn’t cause a “second thought” in the best country in the world.

In a country where Florida News is an established trope, it takes quite an unbelievable story about the homeland to surprise an American. It takes considerably less for a foreigner.

1. Let’s start with a rather positive note about Yankees, from citizen_coping. There will not be many more.

Opening up a conversation with random people out of the blue. Every European I’ve met is surprised how Americans are so quick to tell them everything about themselves… Europeans seem to be much more reserved in conversing with strangers.

Although this comment was perhaps shared by an American, other redditors from around the world were quick to agree. Such as Dirtface1:

Yup visited the US a while back, loved this about them. The Americans are one of the friendliest people I have ever met.

2. Other people had less stellar, saltier reviews of American customs, like this one from EnFlagranteDelicto:

3. Differentdog brings up something that’s quite unthinkable.

Throw everything in the dryer every time without thinking about hanging ones clothes to dry.

4. Terpin piles onto the idea that Americans are just crazy friendly. Who knew?

Many Europeans have been weirded out that I smile and laugh a lot, but that’s okay. I CAN SMILE ENOUGH FOR EVERYONE!

5. American happiness is even more impressive considering the truth of this comment.

Repost this question about themselves once a month on Reddit.

7. AnthillOmbudsman brings up an old favorite.

Have children stand in front of a flag, using a prescribed salute, and chant a pledge to the flag.

I’m British and if a political candidate started talking about how “God meant for me to” or put a huge emphasis on their faith in their campaign then they’d be seen as a few crumbs short of the full biscuit.

9. Seeyouyeah reminds us that guns are not for funs in most parts of the world.

Am English, and if I told my friends I was carrying a gun they’d fear for my sanity, and ask who I was planning to shoot and why.

10. Americans have places to be, partytimebro.

Making a right turn at a red light.

11. TheMusketDood innocently pointed out that the USA is huge compared to other places.

Take 400 plus mile trips like it’s nothing, in a lot of other places you can end up in another country, that speaks a different language and uses a different currency.

12. Candydaze brings up an old grievance that people in Delaware don’t worry about.

You don’t put tax on the price of items at the shops – you’re expected to work it out for yourself.

I know exactly how much my groceries will come to when I get to the till. If it’s small, I’ll have the exact change ready. Knowing exactly what you’re going to be charged feels like it should be a legal right.

13. Uh, Ser_Rodrick_Cassel? Are you talking about a garbage disposal, or did you go abroad with a serial killer?

the death machine under the sink that they use so nonchalantly

14. 77remix probably got tricked into tipping at a McDonald’s.

Tipping someone at a restaurant or for a service

15. VeganPowerViolence has some sort of pro-food agenda that Americans will never understand.

The obscene amounts of food that Americans throw in the trash every day.

16. Way to get real, KevlarGorilla. They’re working on it.

Charging tens of thousands of dollars per day to stay in the hospital, and bankrupting people when they suffer a heart attack.

17. Alocholicdogethrower might actually be a tourism rep from Dallas, because this sounds like fun to a lot of us. (Real talk: wild hogs are dangerous af.)

18. Dirtyburgg has been converted and will gladly attend your Thanksgiving.

Eat waffles (and maple syrup) with chicken. Or that sweet potato and marshmallow thing you guys do. Weird, but yum.

19. This is, again, because we just have so much to get done.

It’s seems walking down the road even to get milk is unheard of, a car must be used.

20. On the other hand, Beastleh, you should see how British people react to the word ‘fanny.’

Get offended SUPER BAD from the word cunt

21. And tylerjames, please report for your drug test immediately.

Get drug tested at an office job.

Welcome to the Land of the Free! Now please let us know what’s going on inside your body so we can fire you even it has in no way affected your job performance.