Netflix’s delectable show You has quickly become the binge-watch of the month, and for good (great!) reason. The characters are complex, the drama is soap-opera level, and the Penn Badgley is hot.

Here’s the thing: Joe Goldberg is hot despite the fact that he is a serial killer, a stalker, lurker, stage five creeper, and disturbing collector of teeth and used tampons. Sure, this is partly due to the fact that he looks like Penn Badgley. But it’s also because Beck sucks in every way, Joe Goldberg is a good guy in some ways, and being someone’s complete obsession has undeniable appeal to many women (me).

Social media has confirmed that I was not the only rooting for the anti-hero all season long.

It’s been a week since I finished the series You and thinking about it still gives me anxiety. All I did was freaking out about Joe getting caught. “Joe, she’s gonna see you.” Joe…JOE. #younetflix

Me when Joe kills Beck’s best friend and stalks her vs. me when Beck cheats on Joe #YouNetflix pic.twitter.com/ZdJoNYx2aK

Joe kills everyone, he's a psychopath, but I don't care, we love you buddy#YouNetflix pic.twitter.com/PAvAc3yaRD

Has anyone else watching "YOU" on Netflix found yourself cheering for the guy then remembering he's a psychopath? ? #YouNetflix

Are you supposed to like Joe and hate Beck in #YOU ? Asking for a friend.

But Penn Badgley is not here for it. The actor took to Twitter to remind fans that sympathizing with and romanticizing Joe is dangerous and problematic. On account of him being a sociopathic murderer.

First of all, he won’t kidnap you. So don’t ask. 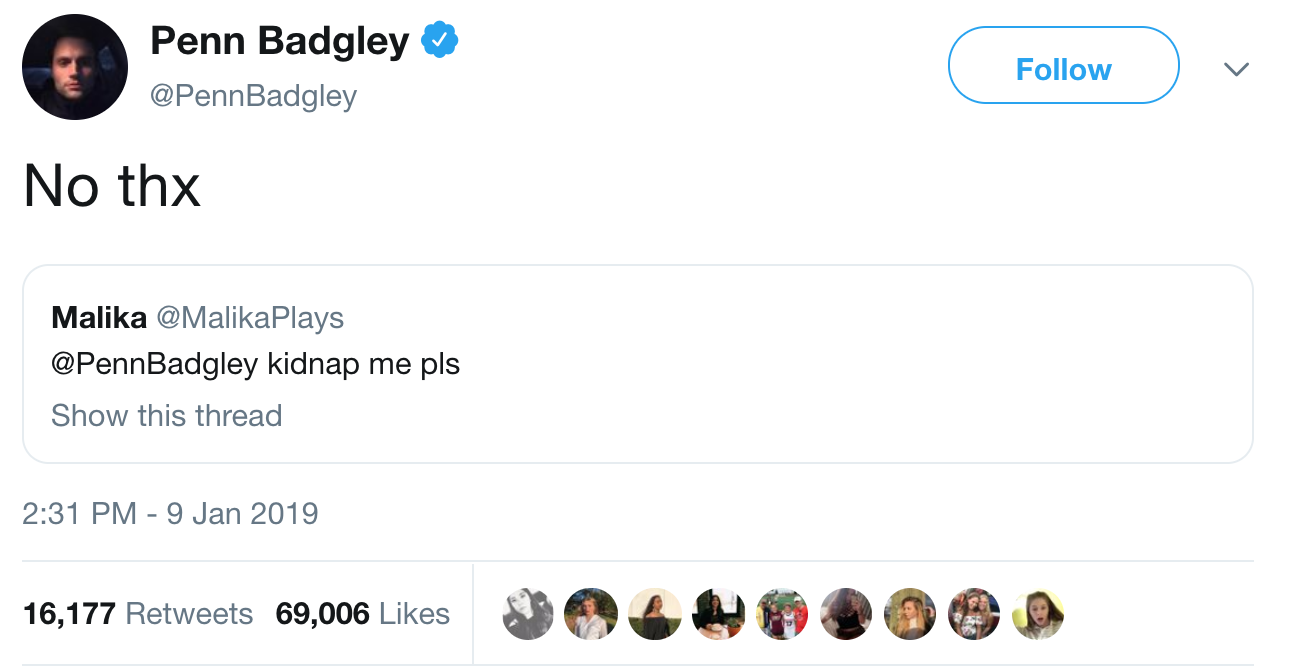 Stop using his attractiveness as reason to stan. 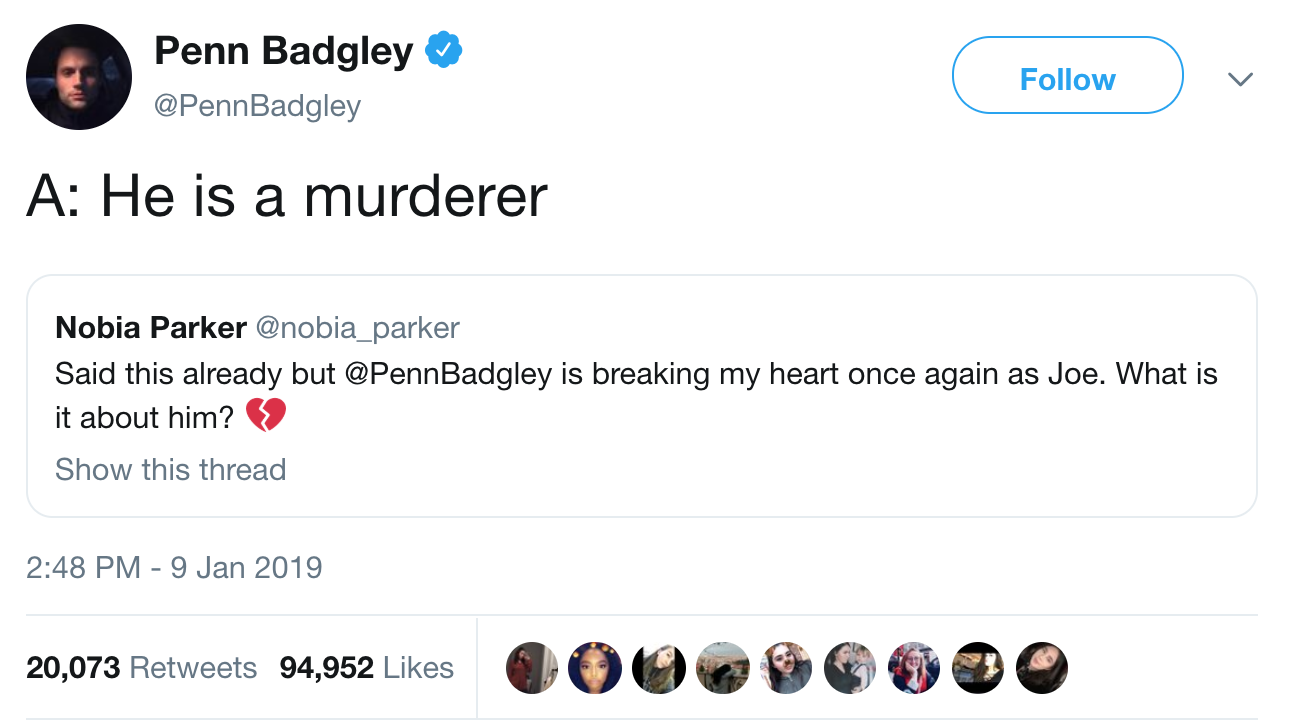 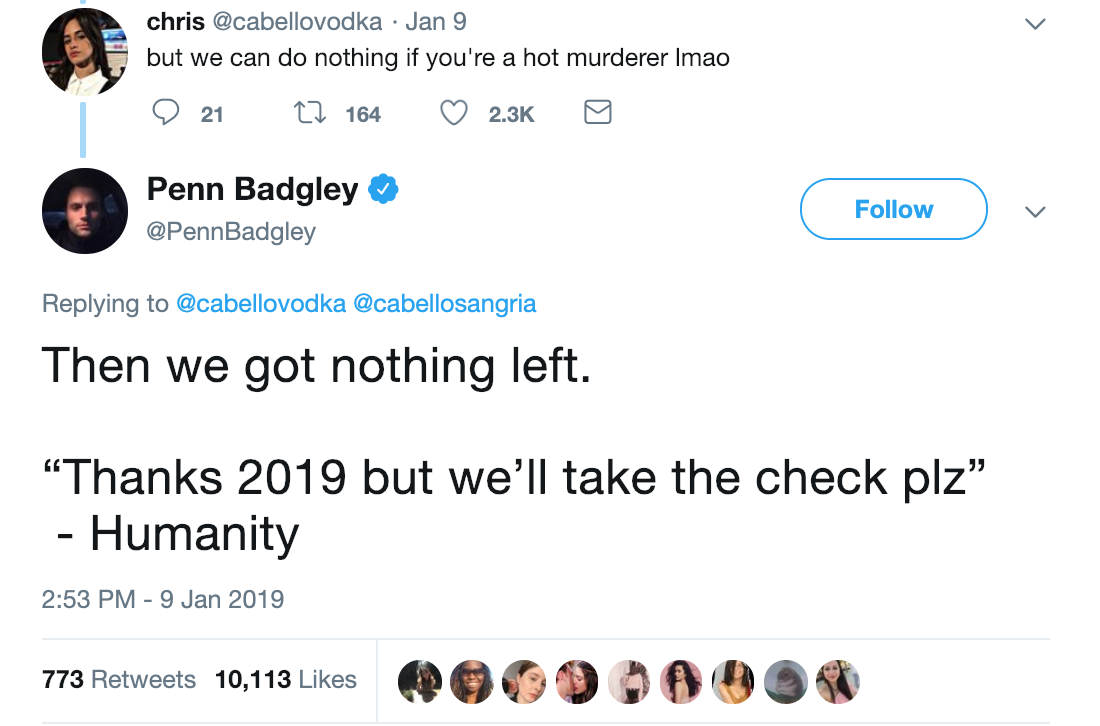 No amount of arguing about his godlike facial structure or full head of delicate curls will force him to change his mind! 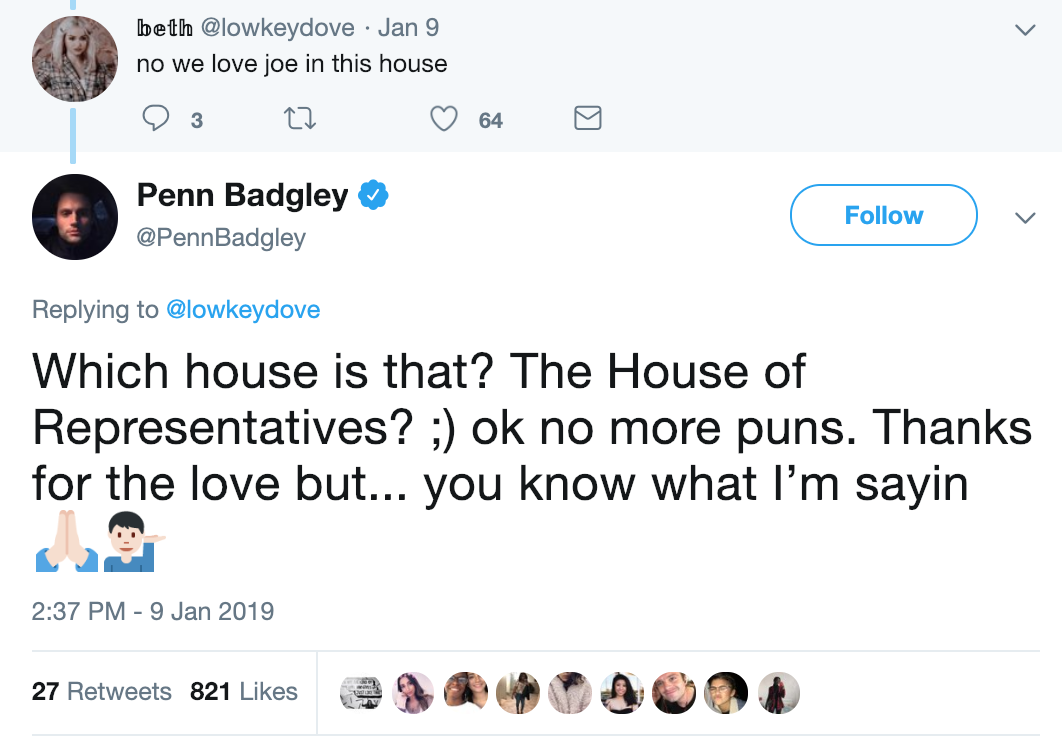 It’s about the crazy on the inside, not the beauty on the outside. 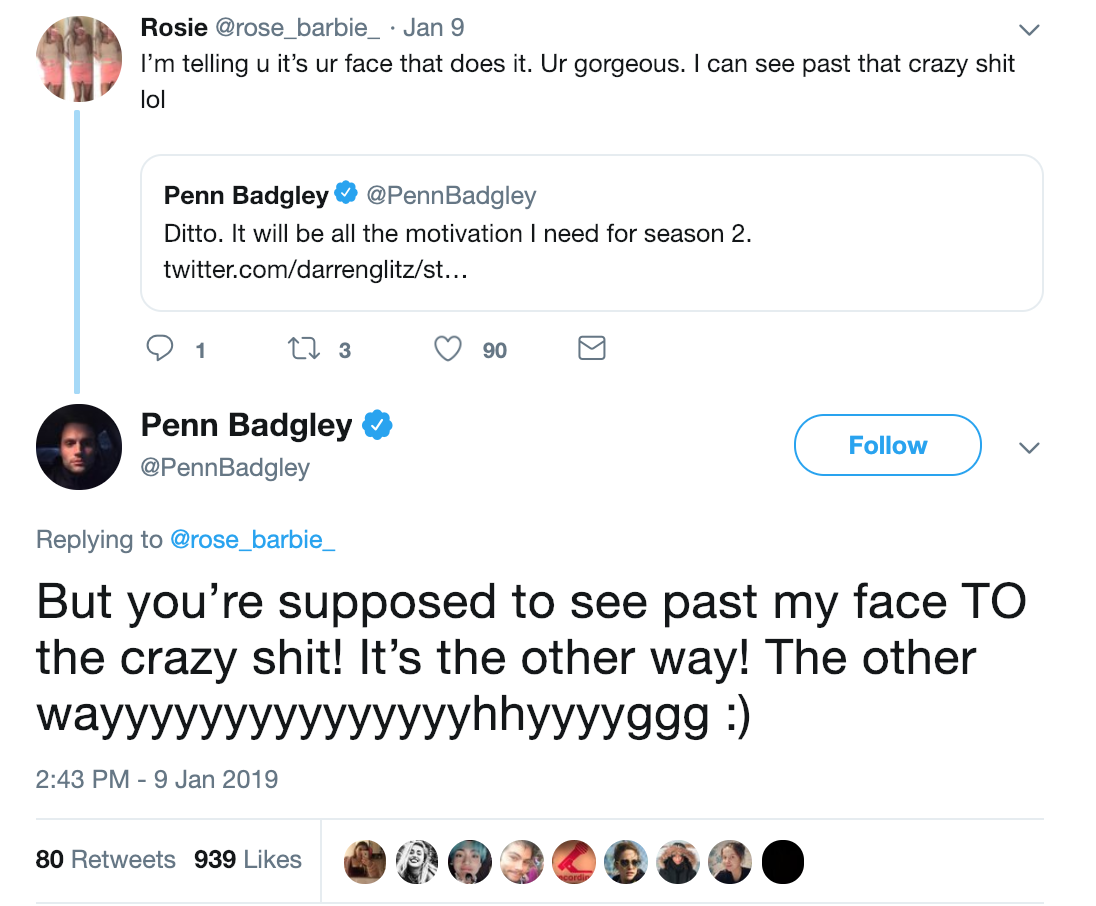 And, maybe, just maybe, Joe Goldberg is a version of Gossip Girl’s Dan Humphrey, all grown up. 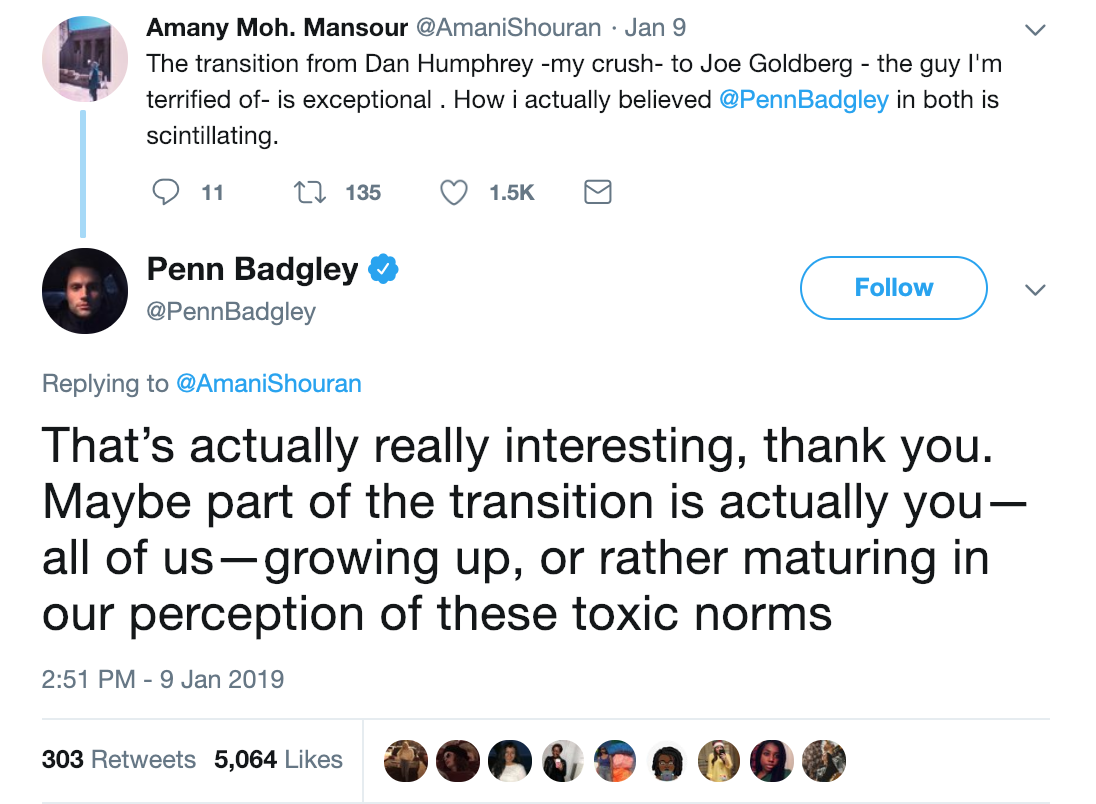 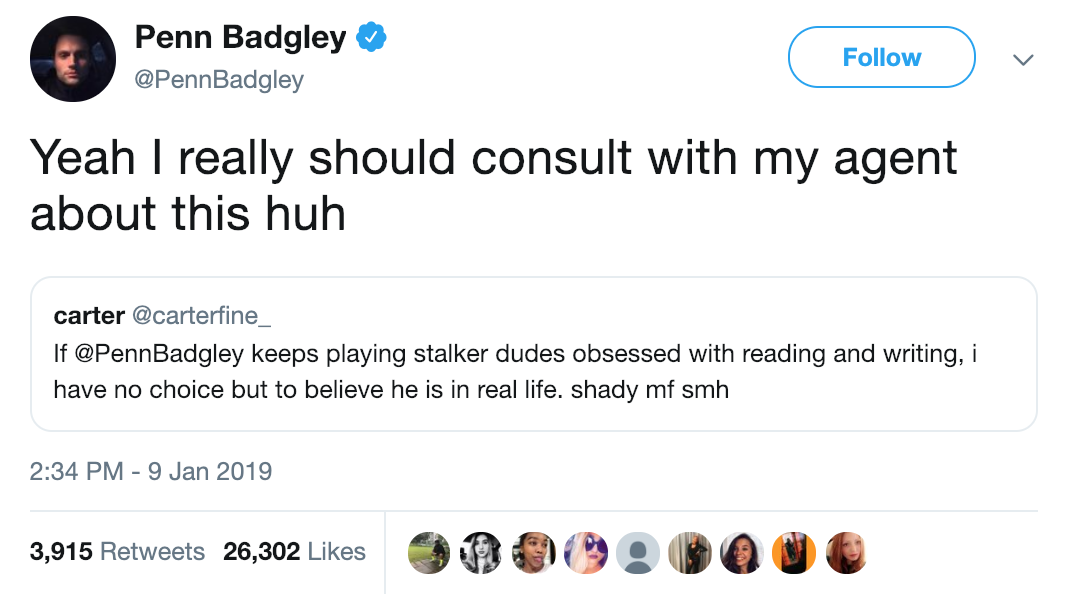 Badgley also confirmed there will be a second season of You, joking that he’ll use the compliments and Joe shippers as motivation. 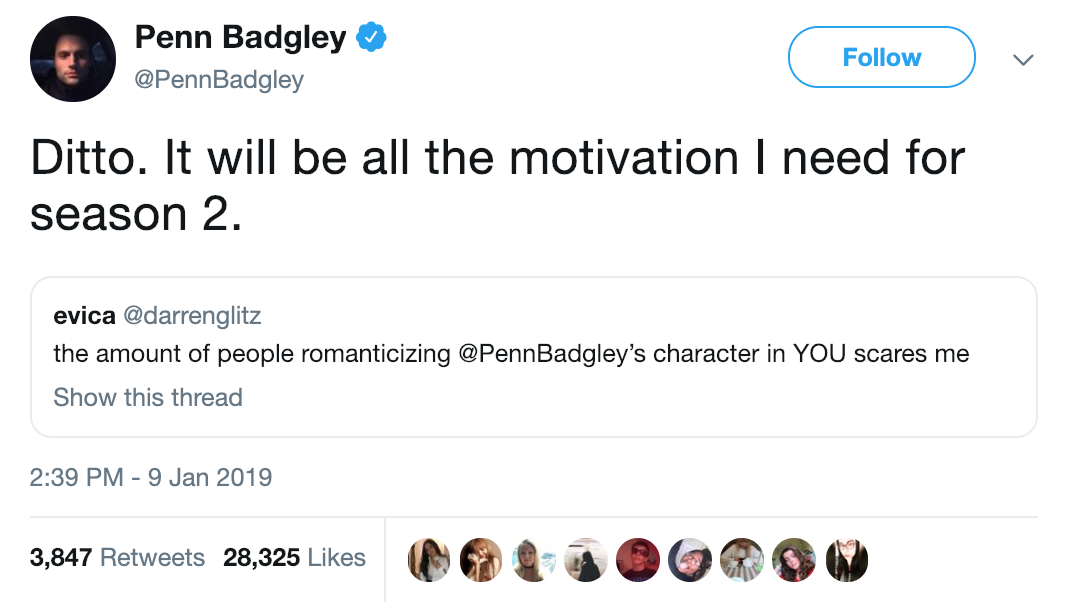 Me now knowing there is a season 2??‍♀️ pic.twitter.com/ChEfg9QpaZ